If you haven’t been living under a rock and/or an uncultured swine, then you know that this past Monday, August 31st, two vocal goddesses went head to head. It was the battle everybody has been waiting for, Brandy vs Monica!

Brandy and Monica both dominated the charts since the 90’s and still continue to do so. However, though they have bops for days, the real reason we needed this battle is because of their LEGENDARY and HISTORIC beef since the making of “The Boy is Mine.” If you recall, they only performed that song live together once at the 1998 MTV Video Music Awards. Before that very performance, it was alleged that Monica put the paws on Brandy.

But aside from all of that, no one can deny that 90’s music is in a lane of its own and should be celebrated. This Verzuz was a night of nostalgia for many who grew up in that era and an opportunity to showcase classics to a whole new generation.

They immediately started this battle off with a bang. Brandy began with “What About Us?” which instantly put me in the mood of “YASSSSSS” and then for Monica to counter back with “Everything To Me,” I knew this was a going to be a hit for hit, no holds barred match.

I can’t lie, I definitely was rooting for Brandy from the beginning because her catalogue is just immaculate. I mean they don’t call her the vocal bible for no reason. But twenty rounds and three hours later, I was left standing there in amazement because Monica truly showed why she is one of the best that there ever was. Imagine having a career that stems from the time you were 12?! And to still be relevant all these years later, Monica deserves all her flowers.

Matter of fact, you can always count on the black community to make history. This Verzuz maintained a viewership of 1.2 million for the three hours that they were on live. That’s exactly how you know that this battle was needed for the community.

Their music is timeless and pulls at your heart strings just reminiscing about where you were and who you were with when that specific song came out. And on top of that, which Verzuz do you know had TWENTY ROUNDS and that wasn’t even a quarter of the hits they have produced during the course of their career.

I know there are many people who are waiting for me to discuss the tension and awkward energy that occurred during the battle, but I won’t get into that. The first thing they admitted was that this was the first time they have spoken or been in the same room together in 8 years, so obviously they’re not about to act like they’re best friends.

What I saw from them were two artists uplifting, encouraging, and praising one another. Whether a true friendship will form, no one knows, but what we will know is that these two put out a body of work that inspired the new generation of artists.

This is clearly the best Verzuz to date but I do have a few more that I would love to see. B2K vs B5 anyone? Chris Brown vs Usher? Xscape vs SWV? The list can go on, but it’s really not about who’s better than the other, rather it’s a moment to celebrate great music. The world needs some form of positivity at this time and music is the one of the few things that can and has united the world together. 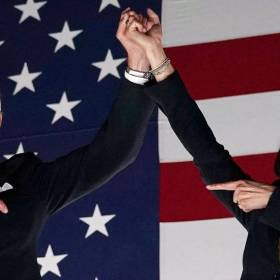